The 13th Pandanet Go European Team Championship season 2022-2023 will start on Tuesday 18th October with the leagues A and B scheduled to start together. Leagues C and D will start the next week on Tuesday 25th October. The European country teams are asked to collect their rosters with the deadline of Friday 14th October.

The rules of play are similar to the previous years. This tournament is an opportunity to maintain goodwill competition and we thank everybody in advance for the sportsmanship and mutual respect. Big thanks to our sponsor Pandanet for making the European team competition on IGS-Pandanet such a strong show.

The tables will be updated before the first round.

The Pandanet Go European Team Championship has excluded Russia from
the current League A, following the decision of the EGF (EGF announcement)

The team and the match results are deleted from the tournament table
and the League A will be played with 9 teams in the coming rounds.

As the League A will be finished with nine teams, the rules for
demotion and promotion of teams are modified for the end of the 12th
season:

League A 9th place team will play a play-off with League B 2nd place
team. League B 1st place team is promoted directly.

League B 10th place team will be demoted to League C, the 9th place
team will avoid demotion.

League C top 2 teams will be promoted to the League B.

League D top 2 teams will be promoted to League C.

I hope our Ukrainian friends are safe and I wish this war to end soon.

The 11th Pandanet Go European Team Championship Finals will be organized August 28-29, 2021 as an online event on Pandanet.

The teams qualified for the finals

To League A: Netherlands
To League B: Austria

To League B: South Africa
To League C: Belgium

The 11th Pandanet Go European Team Championship will begin on Tuesday 20th October 2020. All teams are asked to register their line-up for the Leagues A, B, C and D in the coming two and a half weeks. The schedule, pairings and any additional information will be sent out soon. 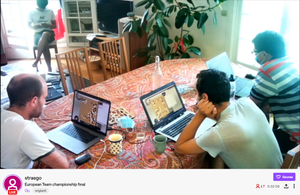 France won the Pandanet Go European Team Championship for the 3rd time overall. The PGETC Finals were exceptionally played online likewise the 37 countries leagues. The Finals were played August 29 -30 and the order is the following:

For the complete results and the game records, see the 10th PGETC Finals page 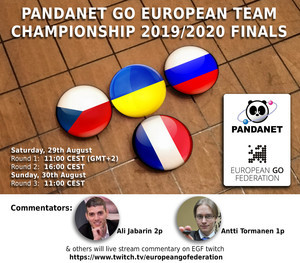 Check the European Go Federation Twitch Channel half an hour after games start!