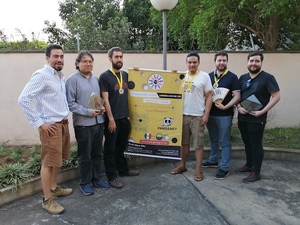 On October 12th during the 3rd Latin American Go Congress in Sao Paolo, Brazil the final match of the 3rd PGLATC took place between Colombia and Mexico on 3 boards.

The first board to finish was the 1st one between Felipe Burgos from Colombia and Abraham Florencia from Mexico on which Abraham managed to capture a large group on an early stage of the game.

On the 2nd board Mexico’s Emil Garcia played Colombia’s Brandal Henao, on which after a sudden invasion by Brandal a rather large group ended up being seized, giving a fair advantage to the Mexican player, which he secured into the end of the game.

On the 3rd board Fernando Manrique from Colombia faced Sebastian Rios from Mexico in what turned out to be a game with some interesting exchanges that in the end favored Sebastian, giving him the victory.

In this way Mexico won the match 3-0, claiming the title for the third time in a row. All three games were broadcasted in Pandanet.

Now everything is getting ready for the 4th PGLATC in which most likely new countries will be joining the league. It’s also worth mentioning that the 4th PGLATC final match will be played during 4th Latin American Go Congress in Buenos Aires, Argentina in 2020, so stay tuned for more updates!