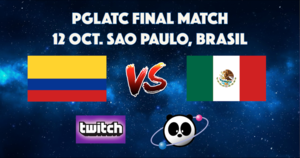 Colombia and Mexico finished as top two teams on the Pandanet Go Latin American Team Championship, after long 11 rounds on which 12 countries played against each other. This grants this two teams a seat in a final match to be held in Sao Paulo Brasil during the 3rd Latin American Go Congress.

Mexico, who has won the two previous championships will be going into its third final.

Follow all three games through Pandanet broadcast and also follow the top board live feed from the Brasil Nihon Kiin twitch channel.