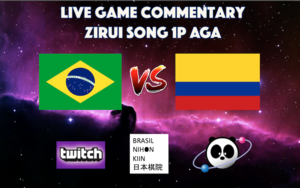 After 10 rounds the league stage of the 3rd Pandanet Go Latin American Team Championship comes to its final round with a triple tie at the top of the table. On this Pandanet event, the top two teams at the end of the league earn a spot to play a face to face final match during the 3rd Latin American Go Congress in Sao Paolo, Brazil.

So far Brazil, Colombia and Mexico have all 8 points, nonetheless on this final round Brazil will be facing Colombia which most likely imply that only one of them will earn a seat for the final match.

Considering the importance of this final showdown, the Brasil Nihon Kiin will be hosting Zirui Song 1p from the American Go Association for a live game commentary on the Brazil vs Colombia second board match. This match will be played between Brasil’s Feng Wang 5d and Colombia’s Juan David Ramírez 4d. Follow the broadcast on Brazil Nihon Kiin twitch channel on Sunday August 11th at 19:30 hrs GMT-6.

You may also follow all the games of this round directly on the Pandanet client where another very interesting match is taking place: Argentina vs Chile, where both teams have lined up their best players including Argentina’s Fernando Aguilar.

As a conclusion we will have a spectacular closing for the league stage of the Pandanet Go Latin American Team Championship so don’t miss it!