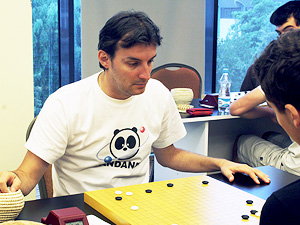 The 58th European Go Congress (EGC) was held in Sibiu, Romania from July26th till August 9th.

The location chosen for this big European Go event was Ramada 4 star Hotel in the city center of Sibiu which is one of the most touristic cities in Romania and also a cultural center being designated as European Cultural Capital in 2007. http://en.wikipedia.org/wiki/Sibiu

Almost 500 players and approx 25 professional from Japan, Korea China and Europe attended the EGC this year and made the main event a very tough competition . For a complete result list of the Open Championship see http://www.egc2014.com/rezultate/main.htm

With 6 wins and 4 losses scored in the main event I tied for 12th place which was quite a decent result regarding the strong field of the tournament won by Yulin Tong 4p of China.

There were many side events taking place in the 2 weeks at EGC and most of them were won by strong amateurs or pro players from China as well, in the rapid tournament I managed to finish 5th overall and 3rd among europeans, see final standings here : http://www.egc2014.com/rezultate/rapid.htm 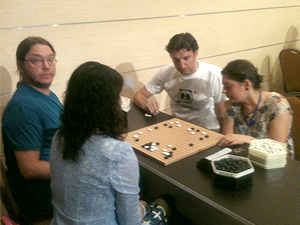 I joined this event with my 1d partner Adelina Sora but we didn’t qualify in top 32 knock-out after losing 2 out of 3 games in groups against strong pairs consisting of pro players but it was a great learning experience. The final results : http://www.egc2014.com/rezultate/pair.htm 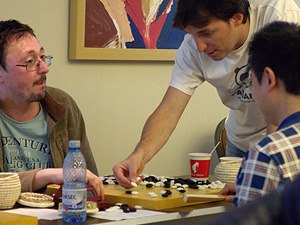 Playing EGC is not all about Go competition but also a good opportunity to make friends all over the world and have a good time in front of the goban or having a drink and a good chat to forget about the tournament pressure.
In hope for better results at EGC 2015 next year in Liberec, Cz Republic I am going to train harder replaying pro games and of course playing rated games on IGS-Pandanet.

Written by Cornel Burzo
Back