The condition that the winner in a game with a player with a provisional rank or in Beginners Class has 50 points added to his or her rating points has been changed. (16 February 2009)

This is a rating system which is easy for all members to understand and accept and in which being able to calculate an accurate rating is a matter of course.

1. The way ranks are expressed

A player starts playing at the rank he or she declares (his or her provisional rank) and receives a certified rank after playing 20 rating games. The mark ”?” is applied to provisional ranks. Certified ranks vary by half ranks. Each rank is divided into two.

Examples of how ranks are expressed

Rating games: Games with opponents with certified ranks are rating games.
However, the following games are excluded.

Handicaps are calculated according to the chart below based on the difference in rank. These handicaps are called “the standard handicaps”. Previously, when there was a difference in ranks, the standard handicap was considered to be one stone per rank, but this is slightly favourable for White (the stronger player). By dividing each rank into two steps and changing the “standard handicap” to follow the chart below, it has been made possible to play games at a more appropriate handicap.

3. Addition and subtraction of rating points

Examples of calculating the rank difference

As previously, changes in the komi can be made by agreement between the players. One point of komi is converted to 1/2 of a rank, and calculations are made on a sliding scale from the above chart.

When the lower-ranked player (playing black) has set a number of handicap stones/komi exceeding the standard handicap, the player with black is considered the stronger player.

Also, when there are few rating games, the addition/subtraction of points per game will be expanded in accordance with the chart below in order to approach the proper rank sooner.

Scale of addition/subtraction per game 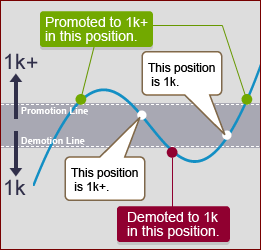 Ranks change according to the addition and subtraction of rating points. At Pandanet, we used different ‘border zone systems’ for the promotion line and the demotion line. This enables players to enjoy their games without frequent rank changes near the rank borders.

View the points for promotion and demotion here.

The lowest rank is 17k, but below there we have established a Beginners Class, referred to as BC.
In the Beginners Class, players are promoted to 17k after five wins regardless of their number of losses.
Conversely, when 17k drops below the demotion line, they are demoted to Beginners Class.

Concerning the first 20 games, a certified ranking is decided solely by the opponents’ ranks, the handicaps, and the results. The provisional ranking is automatically adjusted every five games according to the results to that point, but it can also be adjusted by the player.

The games in the cases specified below do not become rating games, but rating points may be added or subtracted.