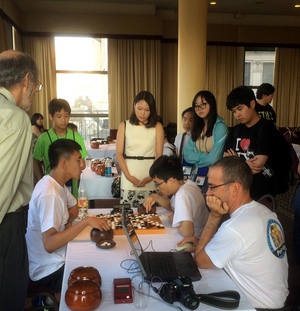 The Canwa Vancouver 1 team defeated Seattle 1 at the Pandanet-AGA City League finals on Saturday afternoon at the US Go Congress. As Congress attendees registered and caught up with old friends, the Vancouver and Seattle teams faced off in the top-board playing room looking out onto the nearby Empire State Building in midtown Manhattan. Bill Lin 7d of Vancouver defeated Ximeng (Simon) Yu 1p of Seattle on Board 1 (photo), while on Board 2, Ho Son 7d from Seattle evened the score by defeating Juyong Koh 7d of Vancouver. On Board 3, Ryan Li 7d bested Seattle’s Momoko Tsutsui 6d to win the event for Vancouver. ”Congratulations to Canwa Vancouver 1 for their hard-fought victory in the finals and for an impressive performance throughout the year,” said Tournament Director Steve Colburn. All three games were broadcast live on Pandanet-IGS and have been posted on the City League website.
- photo by Steve Colburn